Champions rise out of tough times such as Hurricane Irma Posted on September 25, 2017 under Blog, Champion Service. | no comments.

Champions aren’t hard to find in Southwest Florida. In fact, you’ll find plenty if you take a look around your neighborhood, community or workplace. 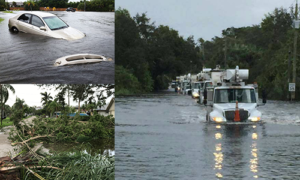 Some are easy to spot. You see them featured on the news for their positive impact on the community. However, many go unnoticed to all but a handful of people, and a select few work silently in the background without any recognition.

Champions are not just people who defeat their rivals in competition. They fight and argue for a cause. They advocate, promote, defend support, back and fight for others.

We saw some amazing Champions during Hurricane Irma. Friends and neighbors provided shelter, comfort and support for each other. Even complete strangers from other states traveled to Naples, Estero, Bonita Springs and other areas hit hard by the hurricane. They brought water, food and other supplies.

LCEC (Lee County Electronic Cooperative), rescue workers, FPL, and many others have been working around the clock in some tough conditions. We know LCEC has a lot of people working hard to restore power not only because we see them in their trucks and at the top of power poles but also because we are cleaning their uniforms.

We consider LCEC Champions and we’re pretty sure the thousands of people who have had their power restored do, too. Now, we are proud to help them look and feel like the Champions they are by providing wash, dry and fold services!

It is not a coincidence we have “Champion” in our name. At Champion Cleaners, we appreciate the many Champions we have gotten to know in Southwest Florida. We take pride in supporting local causes and our community.

We aren’t surprised there are so many Champions in our community. Southwest Florida residents are very generous and giving of their time and money. However, difficult times can bring out the best or worst in people. We’ve seen the best shine through.

It is humbling to see the kindness, compassion and love shown before, during and after Hurricane Irma. Thanks to all the Champions out there!